Facebook Messenger is getting the long-awaited option to ‘unsend’ messages. The capability is similar to that of WhatsApp and can be used to retract anything you may have sent accidentally on the platform.

The feature is available for Android and iOS users, but you should know some important caveats before using it.

How this feature works?

The retracting feature works just like that of WhatsApp, allowing users to delete accidental messages or media files (voice messages, photos, videos) from the recipient’s end.

It makes the texts disappear from their end and displays a message saying ‘This message was removed’.

However, do note that the feature would only work when you’ll use the option within 10 minutes of sending a message. 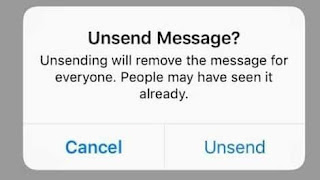 Why this time limit?

Facebook has added the 10-minute limit as a way to keep people from abusing the feature. Basically, it would stop people from harassing others and then removing the evidence of what they had the sent. Plus, it would also keep them from altering old conversations.

How to retract messages using this option?

Open Facebook Messenger and head over to the conversation from which you want to retract a message.

Find the message you regret sending and long press it to get the ‘Remove’ option.

Once you’ll tap on the ‘Remove’ button, Messenger will ask, “Who do you want to remove this message for’.

Select ‘Remove for Everyone’ and the message in question will disappear for all.

If the option doesn’t show up, wait for the update….Read More>>>